The problem of space debris has been well-known among technical experts and the policy community for the past three to four decades [1]. And yet, despite mounting pressures on the sustainable use of outer space, very little progress has been made in tackling this problem. Standards for space debris mitigation are insufficient, and active debris removal technologies are only starting to be tested. More generally, as Daniel Lambach discussed in a previous blogpost, there is no space traffic management in low earth orbit. In this post, we want to outline the space debris problem in more depth and offer some conjectures why it is so difficult to solve.

The UN Committee on the Peaceful Uses of Outer Space (UN COPUOS) defines space debris as “all man-made objects, including their fragments and parts, whether their owners can be identified or not, in Earth orbit or re-entering the dense layers of the atmosphere that are non-functional with no reasonable expectation of their being able to assume or resume their intended functions or any other functions for which they are or can be authorized” [2:2]. The nature and origin of space debris is diverse, ranging from tiny chipped paint particles to screwdrivers lost by astronauts during field missions to uncontrollable satellites whose active mission was terminated. Following Hall, the origin of individual objects can be divided into three groups: Those that arise as an necessary byproduct of missions, others that are generated by accident or oversight, and objects that are the result of intentional actions such as anti-satellite weapons (ASAT) tests [3:2-5].

When quantifying debris objects, a fundamental distinction must be made between those that are large enough to be tracked and catalogued, and those that are too small for tracking. The information on the former comes primarily from the US Space Surveillance Network and similar surveillance efforts, which use powerful radar systems to permanently monitor about 28,200 objects larger than ten centimetres (as of January 2021). In addition, experts estimate that there are 900,000 smaller objects (1-10cm), 128 million tiny objects (1mm-1cm) and countless objects <1mm (source). Even small debris objects have tremendous destructive potential. An object the weight of a marble has the same kinetic energy as a one-ton weight being dropped from a three-story building on earth.

The number of satellites in Low-Earth Orbit (LEO) has also increased, especially in recent years with the widespread adoption of microsatellite technology. Figure 1 demonstrates that 2020 alone has seen almost three times the amount of payload traffic to LEO compared to previous years, which themselves had exceeded earlier periods by substantial margins. Figure 1 starkly illustrates the growth of the commercial satellite industry. Indeed, satellites have become an important sector of the economy and represent a backbone of economic globalization. For example, the terrestrial networks of communications and digital data transmission rely heavily on satellites. A loss of the satellite infrastructure, even if only temporary, would have a major impact on many sectors of everyday life: no air traffic, no digital financial transactions and, over time, more and more terrestrial infrastructure systems would be severely disrupted. 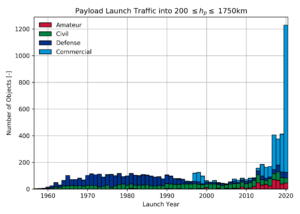 The growing numbers of satellites without a robust system of Space Traffic Management (STM) in LEO itself generates collision risks. There have been four recorded collisions between satellites or between satellites and debris. The 2009 collision between an Iridium communications satellite and a derelict Russian military satellite is the best known, mostly for the resulting creation of more than 2,000 pieces of debris, most of which are still in orbit today. Currently, satellite operators have to organize evasive manoeuvres on an ad hoc bilateral basis – and these occur with increasing frequency. Coupled with the growing number of debris fragments, the carrying capacities of LEO are exhausted, with every further payload adding to the already elevated risk of a “Kessler syndrome” of cascading collisions [1].

There are two main strategies for tackling the space debris problem: debris mitigation and active removal. The first are preventive measures that seek to minimize the creation of further debris objects, primarily through regulations how space missions and payload must be designed [4:4]. National space agencies have begun to develop guidelines to provide a framework for avoiding space debris [5:66-8] and in 1993 created the Inter-Agency Space Debris Coordination Committee (IADC) to coordinate their efforts and exchange information. In 2002, the IADC published a set of guidelines (revised version) that, while non-binding, were nonetheless an important step forward.

The IADC guidelines served as the basis for the work of the Scientific and Technical Subcommittee (STSC) of UN COPUOS, which was to formulate global standards for the prevention of space debris. It completed its work in 2007 with the publication of the Space Debris Mitigation Guidelines, which were ratified by the UN General Assembly later that year [6:692]. However, although the Mitigation Guidelines are incorporated into the mission planning of many space agencies, and some countries even go beyond the guidelines, the UN requirements are not binding and non-compliance cannot be reviewed or sanctioned. The non-binding legal status has led to a multitude of individual rules by states and private organizations (such as the ISO) and ambiguity within the space community [5].

While the aim of mitigation is to prevent the creation of new debris, active debris removal (ADR) refers to all actions taken to remove existing space debris from space [7:553]. Although there have been discussions about the potential and feasibility of ADR for decades, the development of concrete approaches has only gained momentum in the last 15 years. Models indicate that five to ten major objects would need to be removed from high-risk LEO regions each year to stabilize the population and mitigate risks of the Kessler syndrome [8]. Moreover, ADR missions must be developed as soon as possible – the later they are deployed, the smaller their impact. Unfortunately, ADR technology is still in the pilot phase, with national space agencies testing a variety of prototypes in recent and upcoming missions. So far, not a single piece of debris has been removed from space.

In short, international measures to alleviate the space debris problem are insufficient to deal with the ever escala1ating overcrowding of LEO. Even after decades of knowing about the problem, there is no internationally binding set of rules that prescribes uniform prevention measures, nor have successful mitigation strategies been established. ADR technology is still far from being usable at scale.

A key barrier to sustainable LEO use, amongst others, is the multidisciplinary nature of the problem. Dealing with space debris is a legal, technical, economic, and political challenge. In legal terms, space debris is not covered by the existing framework of the five main international treaties governing space activities, which offer little guidance for mitigation and removal alike. On the technical side, while mitigation has seen marked improvements (e.g. through “Design for Demise” guidelines), ADR systems are still only at a prototype stage, and space surveillance systems are incapable of tracking many smaller fragments. Economically, there are too few incentives for satellite operators to invest in mitigation. In addition, developing ADR technology is costly and there are unresolved questions about who should bear these costs [9]. Finally, there are political impediments, such as fears about the dual-use capabilities of ADR technology, gridlock in international bodies such as UN COPUOS, and diverging policy preferences about mitigation standards.

In the language of public policy, this makes space debris a “wicked problem” [10]. Wickedness principally results from three aspects of a problem: a) its complexity, b) the uncertainty relating to risks and consequences of action, and c) a divergence in viewpoints and values. The worse these aspects are, the more intractable a problem becomes. We are unlikely to ever get rid of space debris, so the only realistic goal is to aim for a sustainable management of the problem – but at what level of risk and which mechanisms are acceptable for all stakeholders? These questions have not yet been resolved.

Daniel Lambach is a Heisenberg Fellow at the Research Centre Normative Orders of the University of Frankfurt and a Privatdozent at the Faculty of Social Sciences, University of Duisburg-Essen.

Luca Wesel is holds an MA degree in International Relations and Development Policy from the University of Duisburg-Essen focusing on international space politics.